Here we are, after Kalamazoo in 2011, a Big League Team from Lombardia is heading to the States to play the World Series.

This time after a real tournament played in Italy against two Regional Selections from Cataluña, Spain, and from Bavaria, Germany.

A good bunch of girls, high spirit and lots of dreams: these are the 2015 Big League Europe & Africa Champs, whom I have the honour to lead in this new adventure. 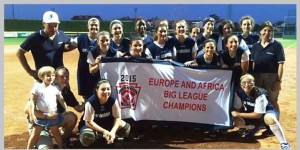